There will only be 21 million Bitcoin, what happens when 7.6 billion people realize that 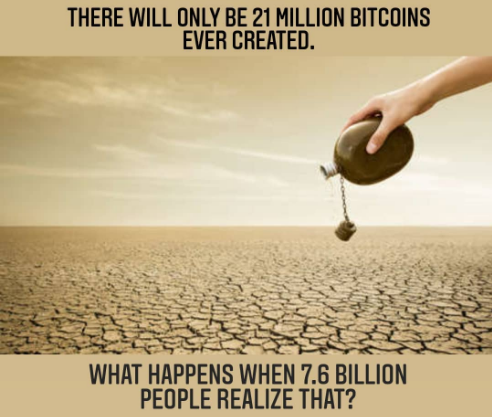 In the financial world, “what’s past is prologue.” Overly rosy perspectives often set off the boom-and-bust cycles that have become all-too-familiar over the past 20 years, from the dot-com bubble to the mortgage crisis. Over the past 12 years, we’ve watched bitcoin’s BTCUSD, +2.38% evolution from netherworld currency to major institutional commodity. In that time, it has fluctuated widely, introduced as a near-valueless currency in 2009, growing in value to $19,000+ nearly nine years later, then losing 76% of its market value within a year, before beginning a steady climb in the second half of 2020 that puts its value at more than $30,000.

We believe that bitcoin has matured and now is the right time to invest in this widely popular currency. Here’s why:

Today, there is significantly more demand for bitcoin than there is supply. About 900 new bitcoin are mined daily, and three market participants alone — PayPal, Square, and Grayscale Bitcoin Trust — purchase considerably more than 900 bitcoin a day because of high investor demand. If this dynamic continues, and we believe it will, much higher prices lie ahead for the dominant cryptocurrency.

At the same time, the risks associated with investing in bitcoin—namely the potential for theft—have been substantially diminished over the past three years, with the U.S. Office of the Comptroller of the Currency authorizing national banks to provide cryptocurrency services. Several banks have also started to provide institutional bitcoin custody services, deposit-taking, custody and fiduciary services for digital assets.

What’s more, the IRS bestowed favorable tax treatment on bitcoin by treating it as property that produces capital gains and losses. And in another positive sign, PayPal rolled out bitcoin trading to its 238 million U.S. users.

As a consequence of these regulatory and infrastructure developments, Wall Street has turned bullish on bitcoin.  Rick Reider, BlackRock’s chief investment officer, recently commented on CNBC that bitcoin “could take the place of gold…it’s so much more functional than passing a bar of gold around.”  AllianceBernstein issued a report on Nov. 30 entitled “Cryptocurrencies in asset allocation – I have changed my mind!”  J.P. Morgan issued a report on Dec. 3 declaring “the adoption of bitcoin by institutional investors has only begun.”

The adoption floodgates are open.

SkyBridge initiated a substantial position in bitcoin on behalf of our flagship funds in November and December, which, at today’s prices, is worth $200 million, and has launched the SkyBridge Bitcoin Fund, which provides mass-affluent investors with an institutional-grade vehicle to gain exposure to bitcoin.

We credit our “aha” moment to Michael Saylor, the chief executive of software company MicroStrategy, who bought $1.2 billion of bitcoin in 2020.  During a recent SALT Talk, Saylor made a persuasive case that bitcoin, as the undisputed winner of the cryptocurrency wars of 2017, is the dominant digital monetary network.  Like Saylor, we believe that when a digital network—think Facebook, Amazon and Google—achieves a market capitalization of over $100 billion, the horse is out of the barn.

Bitcoin is an evolutionary step forward for the technology of money, which has steadily progressed from barter to beads to gold to fiat currency.  Bitcoin is the first store of value in the world where supply is entirely unaffected by increased demand. Some 18.5 million bitcoin have been mined so far, and by 2025, over 20 million will be in circulation.  Yet there can only ever be 21 million bitcoin because of a stipulation set forth in its source code.

To place that number in context, there are 42-plus million people in the world with a net worth exceeding $1 million, meaning there are twice as many millionaires today as there will ever be bitcoins in circulation.

Today, the fact remains that bitcoin’s demand exceeds supply, and it is not even close.  Economics 101 tells us how this calculation will work out.  What more do you need to know?

quicksilv3r
USN Combat VET. AS in Computer Science, wrote a master thesis on the subject of Bitcoin security and Internet security.